Literature on the Long Form 2

T'ai Chi Ch'uan & The 8 Directions:
In Search of the Beginning 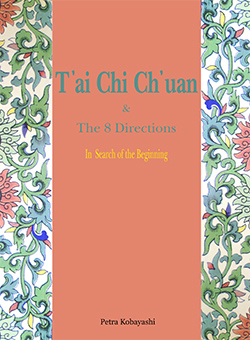 The book opens an access into the area of the inner T'ai Chi Ch'uan. The knowledge of this largely unknown area contributes to a more complete understanding of this unique art.

In accord with ancient traditions of T'ai Chi Ch'uan, the description reveals an original inner performance contained in its movement sequences. The beginning of T'ai Chi Ch'uan emerges in unexpected ways with it. The inner performance in the sense of an inner form is comprehensibly described and in detail. It is also applicable for other styles. The practical realization is explained from the background of two classical forms of the Yang-style from Yang Cheng Fu and Cheng Man Ch'ing.

Knowledge and experience of this ancient Taoist movement art can be an enrichment in many respects. T'ai Chi Ch'uan touches very many more existential areas than is often imagined.

The inner T'ai Chi and the search for it is becoming increasingly important in the western world. Whereby in the classical T'ai Chi, outer and inner are related to each other, they form a unity. That is, the access to the inner Tai Chi is laid out in its forms. It is not something that is unattainable. In order to approach these contexts, it needs learning and practicing following a “form-school” as it used to be given. The forms, if not T'ai Chi itself, point the way.

Therefore, there must be reasons for the fact that today the knowledge of the inner T'ai Chi is so little present and the search for it emerges increasingly.

Concepts of the inner T'ai Chi as they are given in the western world, usually refer to the range of the life energy, Ch'i, and its modes of action. If, thereby, the inner T'ai Chi is already described and such an “inner” is the highest to strive for, one would not have to practice T'ai Chi. An access to the life energy is given by other eastern exercise systems as well.

If we look at the T'ai Chi of the last centuries, different "styles" have emerged from its roots. When T'ai Chi was practiced, one moved within the framework of the respective style, and that exclusively. A mixture with other methods, not even the inner martial arts, was out of the question. The classical forms are demanding, both in the aquisition, as well as, the performance. They challenge students and teachers alike. Taoist values: to withdraw oneself, to let it happen, unintentionality are to be put into practice.

The spread of T'ai Chi in the west not only brought about changes, but also a different way of dealing with T'ai Chi. Simplified versions were created, which can't be assigned to any style anymore. Practitioners know neither the Taoist background nor the history of T'ai Chi Ch'uan. Traditional guidelines for posture and movement are unknown. Nevertheless, such simplified versions - that are still passed on as T'ai Chi – should accomplish the same as the classical styles. They are frequently combined with elements of any western and/ or eastern exercise systems.

Something comparable can be observed in the environment of the classical styles. If they are taught without a form-school and Taoist values are not considered, the path is blocked. A perfection in T'ai Chi seems hardly tangible. Methods are added that are intended to facilitate and speed up the developments promised. If a serious search is given, targeted practices that deal with the life energy Ch'i and its application in self-defense are applied. With it one believes to be truer to the claim of T'ai Chi. One sees the entrance to the inner T'ai Chi, respectively, the inner T'ai Chi itself, given there. The practice of the forms not only steps into the background, it even now finds little respect.

Individual ways develop, which continue, all the same, under the designation T'ai Chi. Independently of the respective direction, the fascination for T'ai Chi is still present. The inner T'ai Chi remains something meaningful, even if it is searched for with the help of other methods. But access to inner Tai Chi presupposes the use of its own means, and that has always been the practice of the forms. They carry the knowledge of Tai Chi within them.

For outsiders these happenings may be difficult to comprehend. It concerns developments, which mark the spreading of T'ai Chi in the western world, not unlike other large eastern exercise systems. Independently of it, the classical T'ai Chi Ch'uan is also passed on and practiced.